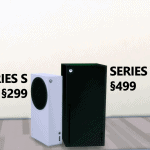 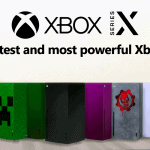 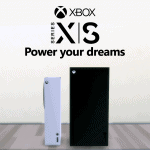 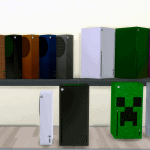 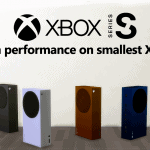 That’s my first object made by myself!

With the Xbox Series X and Series S, your Sim will enjoy a full next-gen experience, with advanced graphics, ray-tracing, no loading times and up to 4K resolution!

The Series X model is the most powerful one, with a 1TB SSD and the capability to run games in 4K with 120fps, while the Series S has a 512GB SSD and can run games in 1440p, upscaled to 4K.

Both come with Brazilian Portuguese and English descriptions, if you want to add the description in your language, just DM me!

Except for the Gears and both Minecraft consoles and the fan pattern which i got from public image databases, all textures and meshes made by myself.

Recolors allowed, just credit me for the mesh!

I hope you enjoy it!

Additional Credits:
Xbox, Minecraft and Gears are properties from Microsoft
Made with Sims 4 Studio
S4PE and TS4 STBL editor used to edit description
Blender for 3D modelling
And menaceman44 for helping me with the normal/specular thing