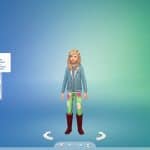 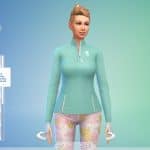 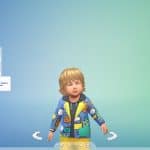 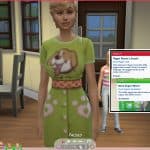 PIGGIE
“Some little ones are just spoiled piggies, and this one is just such a specimen. They’re messy too!”

I felt that toddlers often get neglected when it comes to custom traits, so I created the trait Piggie for that life stage. These toddlers are spoiled and love to eat and make messes! They will act out in ways similar to Wild toddlers, by wanting to run around and take off their clothes, and will want to eat even when they aren’t hungry. They will even get angry moodlets and throw tantrums over wanting to snack. They react even more negatively to hunger than other toddlers. They will become Happy instead of Energized when eating sugary treats. I chose to modify toddlers this way to include more physical variation because unless they have an extremely overweight parent, my sims always grow up very slim, which isn’t necessarily realistic. Hopefully this trait will lead to adorably porky children and add some additional dimension to the game. This is a toddler trait only.

ARTICULATE
“These sims have the gift of gab, almost always say the right thing, but tend to get especially embarrassed when they do misspeak! They also build social, charisma, and comedy skills faster than other sims.”

Articulate sims also put other sims in a good mood just by talking to and being around them with a +1 Happy moodlet. They gain positive moodlets when social interactions go well and when building the related skills. They gain negative moodlets from social interactions gone awry. Their whims include wanting to interact with people, make friends, call on phone, chat, build social, build charisma, build comedy skills. This is a child through elder personality trait.

BEWILDERED
“This poor sim would lose their head if they weren’t attached to their shoulders! They spend a lot of their time in a bemused daze, and have more difficulty building mental and logic skills than other sims do.”

I wanted to create a “negative” trait so here we are! These sims can randomly become confused, or they can become confused due to more difficult activities they are engaged in, such as playing chess or using the telescope. When this happens, they will receive a dazed moodlet of +1 for 4 hours. They learn mental and logic skills at a slower rate than other sims. This is a child through elder personality trait.

Traits should not conflict with anything that I’m aware of, and should work with base game without any packs.

These are the first 3 traits I’ve made, and I welcome any feedback to help me improve these and future mods. Thank you, and happy simming!

Additional Credits:
Thanks to Zerbu for the Sims 4 Mod Constructor.