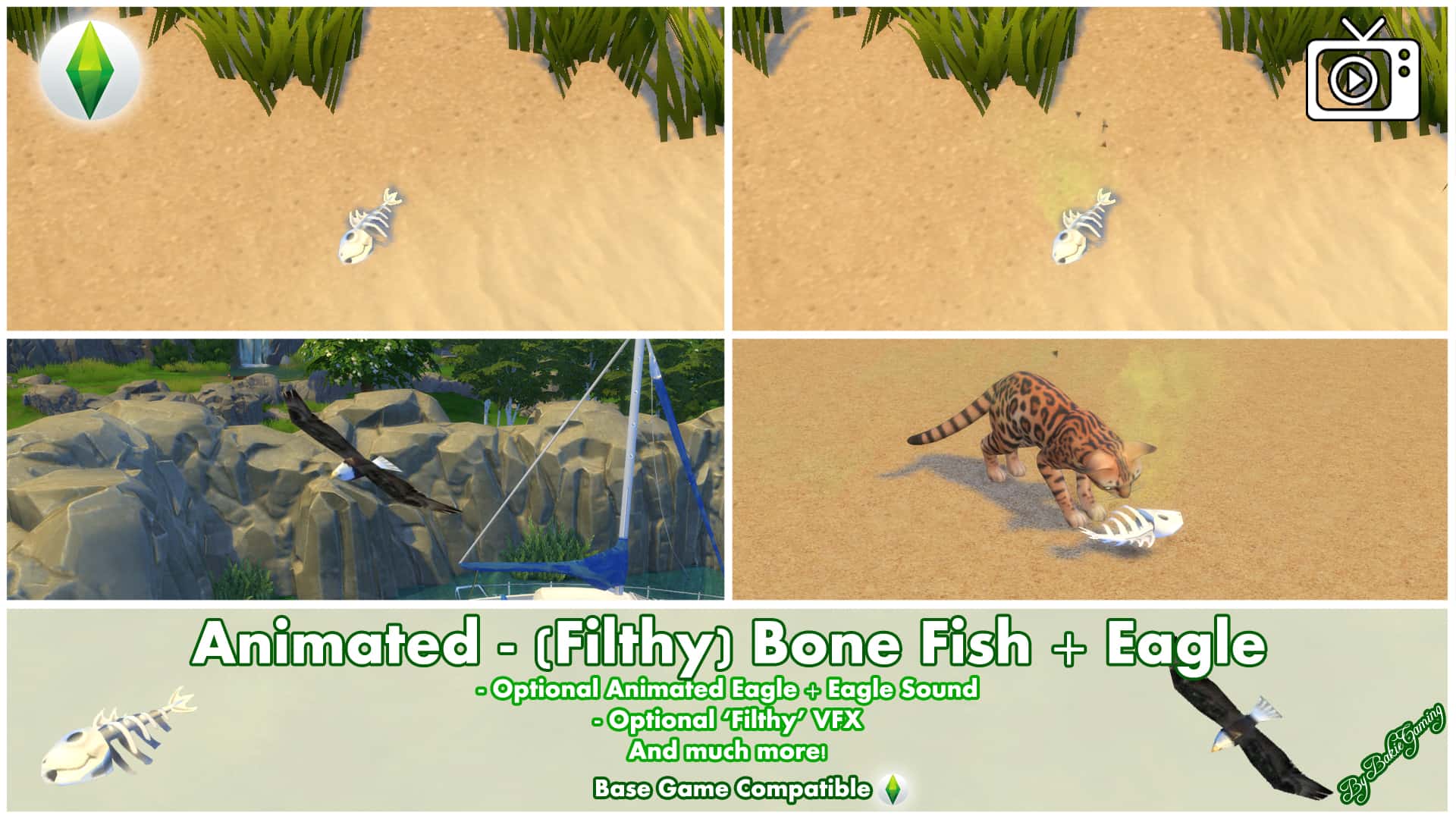 It all started with just a bone fish and the option to spawn an eagle, but ended with a bit more!
Besides the option to spawn an eagle in the sky, you can also activate ‘filthy’ VFX on the dead fish. After activating it, a green smoke and flies will appear around the dead fish.
After these effects have been activated at least one single time, your Sims will also get an uncomfortable feeling when being near this object. Walking away from it, will make this uncomfortable feeling to go away.

As I can imagine that some people rather don’t want the eagle to appear in the sky and/or the mood to be enabled after activating those additional filthy VFX, I’ve added 3 extra swatches which take care of that.
Because these swatches don’t change the color of the object but how they work in game, you can’t use the recolor tool. You’ll have to go to the catalog if you want to use another swatch.

I’ve also added the possibility to place these fish into your Sim’s inventory, so they can be placed outside the lots too.
Both your Sims can place them in by using the ‘put in inventory’ interaction or you can drag them into the inventory yourself as I enabled ‘livedrag’ for this object. This also means you can replace this object while being in live mode instead of build mode.

The last thing I want to share, is that I’ve added the possibility for cats to ‘eat’ the bone fish too. The fish won’t disappear after the eating, but you will see an eating animation. Think as it more like nibbling on the fish skeleton.

To see examples of all the things mentioned above, take a look at the video!

Object information:
This mod only requires the Base Game to work.
It’s a Standalone object, so it won’t override any other objects in game.
To easily find it, type ‘Eagle’ into the search bar.
You can also find it by going to the Decoration’s Misc section.
It can be recognized by my “BakieGaming” icon in the lower right corner of the thumbnail.
The costs are: 2 Simoleons

I hope you like this (Filthy) Bone Fish + Eagle effect and if you do, please leave a comment!
If you want to use it in screenshots or videos, be sure to give me some credit!

>> Want to share my mods? <<
Besides giving me credit and linking back to this page, I would appreciate it if you could add my video instead of (only) the thumbnail.

Additional Credits:
Thanks to the Sims 4 Studio
Thanks Adobe for making Photoshop