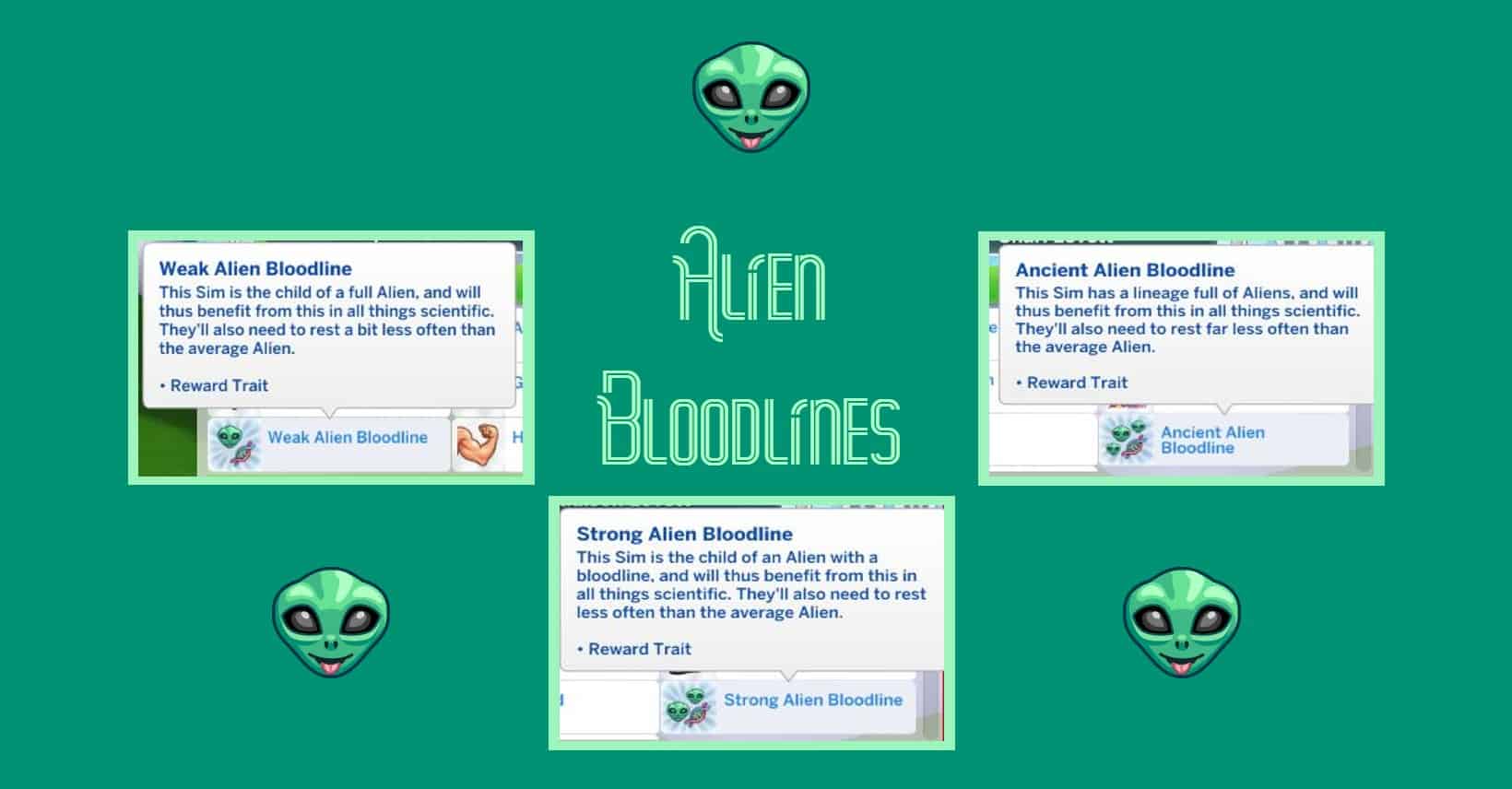 Several existential crises later, I ended up finally finishing the next installment of “giving Bloodlines to other Occults because only Spellcasters got those”. Presenting the long-awaited Alien Bloodlines! Which had been awaited since like, two weeks ago, tops.

Update log:
December 26, 2021: Added trait conflicts and finally added the Polish translation by Damessa7 and I am very slow, I know :c

This mod requires MAL22′s Trait Tracker Injector, and will not work without it.

Much like the Spellcaster bloodlines in-game as well as my Vampire and Mermaid Bloodline mods, these traits will provide your Aliens with some boosts the further along the family line they are, so a newly spawned Alien won’t compare to an Alien whose great-grandparents were also Aliens!

These Alien Bloodline traits follow the same inheritance rules as the original Spellcaster traits, starting at the first-gen Alien, then following the trend of Weak -> Strong -> Ancient.

There are two versions, but first, let’s go over the perks.

* This is where the two versions come in. Considering how stumped I was about what perks to give Aliens for this, I ended up trying to fix up Nyx’s Enhanced Aliens mod. You can get Enhanced Aliens close to its original form here or if you use any other mods that might conflict with reward traits/aging up aliens, you can use my alternate-unlock-criteria version here.

If you use that, choose the nyxCompatible version! Don’t install that version if you don’t have Nyx’s Enhanced Aliens, as I made that version target the decay and expense of Brain Power, and your Aliens will only have that commodity if they are Enhanced Aliens.

The regular version is the one that targets energy. Choose only one, I can’t stress this enough!

Any future plans?
I have follow-up plans for both my toddler-consequences mods and these mods, mostly in the form of seeing if I can implement some extra tidbits for Mermaids, since they’re only slightly less boring than Aliens in their original form. Buuuut, working with Nyx’s Enhanced Aliens is now tempting me to look into others among Nyx’s broken mods. Bahhh, I’ll see what I end up doing, unless anyone likes a particular path over the other and would like to say so.

Known issues:
Compatible with hybrids, but the own game’s Spellcaster bloodline traits don’t like Aliens. My other bloodline mod traits work fine with it, though.

Credits:
This wouldn’t have been possible for me to do without Zerbu’s Mod Constructor and The Sims 4 Studio. They are exceptional programs and I thank their creators for making them. And of course, thanks to the MAL22’s Trait Tracker Injector for making the functionality of bloodline traits easier to implement.