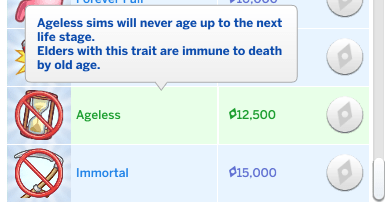 Update: Fixed an issue with the script file. The traits will now correctly show up in the rewards store.

Important Install Information
This mod contains a script component. The .ts4script file MUST be placed directly in your mods folder or at most 1 subfolder deep for the rewards traits to be added to the rewards store.

Ageless – Costs 12,500 Points
Sims with this trait will not age up.
Elders with this trait will be immune to death from old age.
Note: The age bar may still appear to fill up, but don’t worry, your sims will not age up when it’s full.
This is just a result of how EA tracks a sim’s total days alive (used by EA to determine the sim order in the household and the “total days lived” tooltip for vampires).

Immortal – Costs 15,000 Points
Sims with this trait cannot die. Nothing can kill them.
They will still age up normally to the elder stage with this trait, but they will not die of old age.

Compatibility
This mod does not overwrite any game files. It uses a scripting-based approach to add to the rewards store.
It should not conflict with any other mods and should not be broken by patches.